Many of the most historical places in Shanghai are within walking distance of each other, so you can discover the old areas of the city on foot or by taking a few strategic taxi rides. 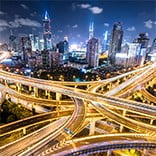 While tall, futuristic buildings dominate the skyline of Shanghai, you don't have to go far to find the history of the city. Rise early for a stroll down the Bund, admiring the east bank's extraordinary modern high rises, then turn west to discover Old Shanghai, the Former French Concession and other historical sites. If you want the stories that come with each landmark, hire an English-speaking guide for a Shanghai one day tour.

Nanshi, also called the Old City, is the original walled city of Shanghai. It's at least 1000 years old and the walls were built as protection against pirates.

The promenade known simply as the Bund stretches for nearly two kilometres along the bank of Shanghai's Huangpu River. It's been a feature of Shanghai life for hundreds of years and runs past many historic buildings that were once banks and trading houses occupied by companies from the United Kingdom, France, the United States, Italy, Russia, Germany, Japan, the Netherlands and Belgium. These old buildings look especially wonderful at night. The Shanghai Club and Masonic Club, two of Shanghai's most famous buildings of character, are also on the Bund.

To fully appreciate the history of the Bund, start your journey at the northern end of the promenade near Waibaidu Bridge. Famous places include the former British Consulate, now a hotel that does a fantastic afternoon teas; the Rockbund Art Museum, which features Art Deco styling with Chinese motifs; the House of Roosevelt, now home to Roosevelt Sky Bar and Restaurant; multiple old bank buildings; the Fairmont Peace Hotel, with its distinctive roof pyramid; and the Shanghai Customs House, which has a 90-metre clock tower.

Nanshi, also called the Old City or Shanghai Old Town, is the original walled city of Shanghai. It's at least 1000 years old and the walls were built as protection against pirates. The walls don't exist anymore, Remin and Zhonghua Roads are where they used to be, however many of the architectural treasures of the Old City remain.

A private walking tour with a local English-speaking guide will ensure you see the best of the Old City. You'll learn about Taoist beliefs and spiritual traditions as you wander through the lively 'lilongs' (residential streets), enjoy the Ming-era classical Yu Garden and visit Chenghuang Miao (Temple of the Town God). Shopping and eating are part of the experience.

Yu Garden in the northeast of the old town deserves special mention. Created in 1559, and also known as the Garden of Happiness, it has an outer and inner garden. The outer garden includes a building with incredible roof ornaments, figurative representations in bas-reliefs and dragon-adorned walls. The inner garden features attractive little pavilions, decorative stones, miniature mountain ranges, dividing walls and small ponds. You'll have a photography frenzy here.

The Former French Concession (FFC) was essentially a little bit of France in China. It existed from 1849 to 1946, and was once the premier residential and retail district of Shanghai. It was also the centre of Catholicism for the city. Despite development over the last few decades, the area retains a distinct French character and charm.

You'll need your walking shoes for proper exploration, because the FFC is considerable. It's about eight kilometres wide stretching west from The Bund. During your wanders make sure you find Wukang Lu ('Lu' means 'Road' in Mandarin), a beautifully quaint street lined with elegant historic buildings. There are outdoor restaurants and wine bars here for lunching and dining. Anfu Lu, Yongfu Lu, Hengshan Lu, Dongping Lu and Yueyang Lu also have areas of restaurants and bars. You'll see fashion boutiques here too, as well as quaint historic residential buildings. At 7 Xiangshan Road is the former residence of Sun Yat-sen, the first president and founding father of the Republic of China. Touring his house, now a museum, will take you back in time about 100 years.

Within the FFC is beautiful Fuxing Park. Originally a Ming Dynasty park, it was Frenchified and re-opened during the French Concession era in 1909. If you ever need to escape Shanghai's hustle and bustle, this is your place. In the north of the park you'll find the massive statue of Karl Marx and Friedrich Engels - it's 6.4m tall and weighs 70 tons. Another attraction is the 'mattress flowerbed', which is replanted every season. You can also stroll through rose, camellia and azalea gardens. More than 10,000 trees of various species have been planted in Fuxing Park in recent years, providing welcome shade on hot summer days.

People watching in Fuxing Park is always rewarding. You're likely to see Mao-suited men walking their caged birds, tai chi exponents, singers, dancers and musicians. Afterward, wander the residential lanes nearby, to get a feeling for what it's like to live in Shanghai.

Temples and monasteries of Shanghai

There are many different religious groups in Shanghai: Confucianism, Taoism (aka Daoism) Buddhism, Islam, Christianity and Popular Folk Religion. Taoism and Buddhism have
the biggest following, however Shanghai also has the largest Catholic presence in mainland China. Tourists are generally welcome at churches and temples.

Longhua Temple is the oldest and largest Buddhist temple in Shanghai. Historians believe it was founded in the 3rd century. The most captivating feature of this temple is the Thousand Luohan Hall, which is inhabited by hundreds of golden statues. Another religious site to visit is the Jade Buddha Temple, originally built to house two jade Buddha statues that arrived from Burma in 1882. Also try to visit Confucius Temple (Wen Miao), which features a large statue of Confucius and the extraordinary Kuixing Pavilion in the western part of the compound. In total contrast to these temples is Xujiahui Cathedral (St. Ignatius Cathedral), known as 'the grandest church in the Far East', it was designed by English architect William Doyle and built by French Jesuits between 1906 and 1910.

One of the best day trips from Shanghai, Zhujiajiao is a relic from the Ming and Qing Dynasties - a quaint little town that's sometimes called 'the Venice of Shanghai' or Zhujiajiao Water Town, because it's build around on over tributaries of the Dianpu River. It's impossible not to marvel over Shanghai's history when you're standing on Fangsheng Bridge, the longest, largest and tallest stone bridge in Zhujiajiao.

Gazing out over the town's gently running streams, as willow trees and lanterns sway in the breeze, is mesmerising. Elegant North Street - full of historic buildings, old stores and bridges - is another scenic highpoint. You'll see old rice shops, banks and spice stores - even a Qing dynasty post office. Finish your sightseeing with a leisurely stroll through Kezhi Garden, which has magnificent architecture and a charming courtyard.

Another water town to visit is Zhouzhuang. It's just over an hour's drive from Shanghai, so it makes a great day trip. The town has lakes on all four sides, 19 stone bridges and some extraordinary ancient residences - the Zhang complex has 70 rooms and a river running through it. Apart from 900 years of history, Zhouzhuang has a wonderful feeling of watery serenity.