Earn 1 Airpoints Dollar™ for every $100 you spend

Sorry, we couldn't find any results for your search

Delve into another dimension with our Virtual Reality Escape Rooms using the latest technology to bring you an exciting and immersive 3D experience!

Get your team of 2-6 players ready for the adventure of a lifetime in Virtual Reality!

Experience the best VR Escape Rooms Melbourne has to offer with 10 exciting games to choose from with immersive storylines, incredible graphics and worlds with amazing scale and detail.

Your team will need to work together to solve clues and puzzles using your hands, body and mind. Each player has their own space in which to move around allowing you to grab, throw and move within the virtual world.

Our maximum number of players in one game is 6 (although some of our games have a limit of 4). If you have more than 6 people you can split into two groups and try to beat each other’s time!

Here is a sample of some of the available games on offer:

An expedition team searching for the Lost Pyramid of Nebka disappears mysteriously in the Sinai Peninsula never to be seen again.

Using a simulation constructed from their DNA memory your team will follow in their footsteps to find out what happened and exactly what it was they were searching for.

Society has collapsed with the technological advances of the 22nd century. Corporations are at war over data and people are becoming more machine than human.

Your team made up of cyborgs is about to steal some rare data from a massive corporation - but it won't be easy to infiltrate the complex and download the data without being noticed.

You are in a creepy abandoned cabin in the woods, at night, when you realise you are locked in! With no electricity and only a flickering candle for light...wait... was that someone's shadow???

Face your fears and solve the riddles in order to escape!

In a dark world full of mystical creatures you receive a letter from a friend asking for help before she mysteriously disappears. You will investigate an abandoned monastery, encounter paranormal phenomena and face horrifying secrets in order to succeed.

The Secret Service has captured a known terrorist threat, but all is not safe, it turns out this maniac has installed a nuclear warhead in an abandoned high-rise. The building is filled with traps and obstacles and you have been called in to save the day. No pressure...just disable a nuclear warhead and save the city!

The Queen of Hearts has put a spell on Wonderland and you (Alice) will have to do what it takes to break the spell. Drink the shrinking potion, follow the rabbit and help the hatter with his tea party! The Cheshire Cat and wise Caterpillar will help to guide you to the castle to defeat the evil Queen of Hearts.

All prices are shown in AUD ($)

Natalie Green from Australia wrote on 09 May 2022

The entire experience was amazing . The Staff were nice , helpful and friendly too .

An absolute must do

This was so much fun. Certainly a highlight of my weekend. The crew were awesome and helpful along with interactive during the game. A great laugh and enjoyed the challenge. Thank you apsis vr

Thank you for your review! :)

I took my granddaughter to the Virtual room and didn’t anticipate to take pat as well. But it was amazing experience, I am so glad that I share it with my granddaughter. Staff was very helpful and supportive. We definitely will go again. 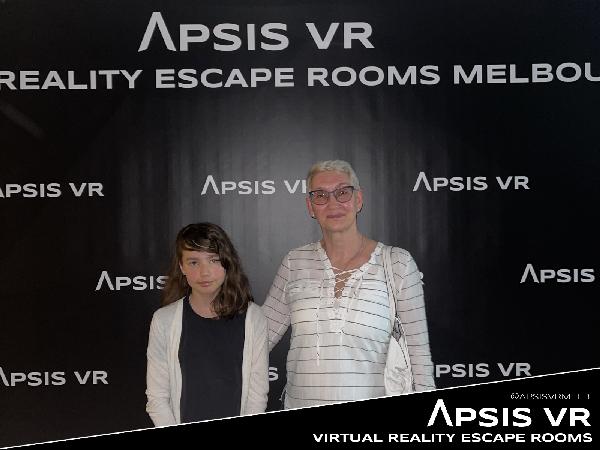 Thank you for your review! :)

*This option must be made together with another price type.
Clear Select
close

This item will be deleted immediately. You can't undo this action.

Create your Bookme account and start keeping track of your bookings and favourite deals.

Thanks for your question!

Your message has been sent to Virtual Reality Escape Room - Apsis VR Melbourne and you should hear from them shortly.

Create your Bookme account and start keeping track of your bookings and favourite deals.