Sensational places to eat in Perth, craft beers to try in Fremantle and winery restaurants in the Swan Valley - WA knows what you want!

Exciting new bars, cafés, restaurants and Sunday Session pubs are earning five-star reviews in all corners of Perth, adding to the ever-growing list of venues for indulgence and relaxation. Fremantle is also exploding with fun places to eat and drink, and many of them come with waterfront views. Upriver from the city is Swan Valley, a verdant swathe of vineyards, orchards and farms that supply winery and brewery restaurants with the ingredients they need to create exciting menus.

Graze your way around the best Perth restaurants

Perth has more restaurants per capita than any other Australian state capital. And it's not just the quantity of restaurants that will impress you; the quality is right up there too. In recent times, the traditional Perth dining hubs of Northbridge, Leederville and Mount Lawley have been joined by gorgeous new inner-city dining experiences, such as the award-winning Italian restaurant Santini at QT Perth Hotel, Garum at Hibernian Place, The Reveley at Elizabeth Quay and Shadow Wine Bar, adjoined to the Alex Hotel.

You'll also find exciting dining at the beautifully restored State Buildings, including the award-winning rooftop restaurant Wildflower, which has a menu that revolves around the Indigenous six-season calendar. Crown Perth adds to the riverside precinct's range of fine dining options with Nobu, Bistro Guillaume, Silks and Rockpool, while a string of oceanfront restaurants and cafes serve up quality seafood and pub fare with a perfect Indian Ocean sunset in the backdrop.

If you want something specific, like paleo, vegan, Vietnamese or Korean, Perth is fully-loaded with every restaurant type and ethnicity. Check out the reviews, then follow your nose.

Cafes for breakfast, brunch and the perfect Perth lunch

In Australia's sunniest state, starting the day with an alfresco brekky or brunch is a pleasure you'll want to enjoy every morning. Long before the sun is up, Perth cafés are prepping dishes you'll want to order again and again. And if you're a late riser, they're also open for lunch.

For a quick bite, try Toastface Grillah in the city. Or make a real meal of it at Petition Kitchen - they do breakfast, brunch and lunch with conviction. In Fremantle you can enjoy something super healthy at Ootong & Lincoln or dip into the all-day breakfast menu at industrial chic Moore & Moore café. On the banks of the Swan River, along the Indian Ocean coastline and around marina precincts there are fantastic breakfast, brunch and lunch spots turning locally-produced ingredients into dishes that deserve a place on your Instagram feed. The coffee's excellent too - look for locally roasted brews from Little Owl, Humblebee and Blacklist.

A Perth lunch or winery cruise on the Swan River is another way to enjoy WA's consistently fabulous weather. There's a choice of boats and operators offering cruises that include lunch. There's even a cruise that involves Perth craft beer, including a stop at the Old Brewery & Riverside Brewhouse and Australia's biggest mega pub, The Camfield.

With more than 10,000km of coastline, over 200 rivers and hundreds of lakes, Western Australia is brilliantly equipped to serve you up an endless parade of delectable seafood dishes. For casual eating, there's a concentration of takeaway joints and fish shacks in Scarborough, which is on the coast just 20 minutes north of Perth city. Find yourself a nice piece of north west barramundi, tuck into some whiting or get your jaws around a snapper burger. Time your arrival for the end of the day and you'll get an Indian Ocean sunset as a side dish.

Other WA seafood specialties can be found at the best restaurants in Fremantle and Cottlesloe. Look for western rock lobster, Shark Bay or Rottnest scallops, Exmouth prawns and Mandurah crab. Also keep an eye out for Broome pearl meat on the more creative menus; the firm, delicious flesh of the pearl oyster, it's the new star of the Perth seafood scene. As far as freshwater seafood is concerned, marron and yabbies' from around Margaret River are finger-slurping good.

Visit breweries and wineries near Perth

To get to Swan Valley, you can bus to the valley then hire a bike to get around. Alternatively, jump on a foodie tour or catch a boat from Perth and cruise up the Swan River. If this idea grabs you, boats leave from Barrack Street Jetty and tour companies do city pick-ups. Otherwise, rent a car and drive yourself around the valley. You could even stay a night or two, which means more time for ticking off some of those wonderful Perth wineries and restaurants.

The Perth seaside suburb of Fremantle is the birthplace of Australia's flourishing craft beer scene. The first small-batch brews were produced at the Sail and Anchor Bar, where you can still enjoy a tasting paddle of local creations. Close by is Monk Brewery & Kitchen, where they make cider as well as beer. And don't forget to call into the legendary Little Creatures on the waterfront, which used to be a crocodile farm.

In the city, Bright Tank Brewing has an edgy industrial feel with a sensational view, while the Camfield sits adjacent to the new 60,000 seat Optus Stadium with its Bevy brew featured across the 180 taps. Then there's Northbridge Brewing Co, which pours local ales right in the heart of the entertainment district - the perfect addition to a rooftop and laneway bar crawl.

Although not a brewery, Petition Beer Corner deserves to be included in brewery tours. They are an enthusiastic supporter of independent brewers from across Western Australia, so you'll find an epic choice of constantly-changing beers on tap.  If you're heading to WA in November, see if you can squeeze the Fremantle Beer Fest or the Western Australia Gourmet Escape into your plans.

On Sunday, make like a WA local and relax in the fresh air with a Sunday Session. A 'sesh' traditionally involves gathering a bunch of friends for an afternoon of food, bevvies and live or DJ music, preferably at a waterfront or alfresco-style pub.

Perth's top spots for a Sunday Session include the Ocean Beach Hotel and Cottesloe Beach Hotel at Cottesloe Beach; Embargo on the Point in Perth city; The Standard or Henry Summer in Northbridge; Bathers Beach House, the Norfolk Hotel, Little Creatures or The Left Bank in Fremantle; The Breakwater at Hillarys Boat Harbour; Queens Tavern or The Flying Scotsman at Mount Lawley; and The Garden in Leederville. El Grotto and The Sandbar in Scarborough also gets great sesh reviews.

Before booking and before you fly, please check that you meet all requirements for international travel. 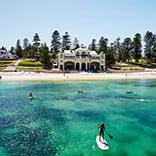 Start planning your trip to Perth