Beach life is fused to city life in Sydney, so you can mix urban pleasures with swimming, surfing and refreshing seaside hikes.

Sydney is very much a marine city. At its coastal edge the Pacific Ocean delivers non-stop surf to easy-going beachside suburbs like Dee Why, Manly, Bondi and Coogee. Around the vast inner harbour, an intricate system of waterways supports an excellent ferry system and beautiful water views for the inner city. To make the most of Sydney's connection with the ocean, put some time aside for sea-scented adventures.

There aren't many places in the world where great surf beaches are part of the city environment. It means you can catch a wave and soak up some rays, then find an excellent seaside restaurant or café within metres of the ocean. Beach time can also mean shopping time, because town centres are slap-bang next to the sand.

Top of mind when you think 'Sydney beaches' is Bondi. Easy to access by train or bus from the CBD, this magnificent surf beach deserves its legendary status. The sand is fine and white, the waves never stop rolling and there's a huge choice of eateries and bars close at hand. Plenty of accommodation here too, if you want to avoid staying in the city.

On the same piece of coast as Bondi you'll find the beaches of Tamarama, Bronte, Clovelly and Coogee. Each of them is beautiful in its own way. Do the coastal walk from Bondi to Coogee and you'll meet them all.

On Sydney's northern side, and easy to reach by ferry, is Manly. There are surf breaks at each end of the beach and great body-surfing waves in between. The sand is golden, the shore is lined by fresh-smelling pine trees and the nearby restaurant precinct is fabulous.

For a beach experience that's light on crowds and big on privacy, check out Milk Beach in Vaucluse on the eastern side of Rose Bay. It's a lovely spot for a swim, plus you get a magnificent view of the harbour bridge.

If you love Bondi, but don't love its popularity, McKenzie Bay could be a good alternative. It's wedged between Bondi and Tamarama, down a set of stairs. The sand comes and goes from this beach, but it's always a glorious place for a picnic on the rocks.

Another little-known swimming spot along the Bondi coast is Little Bay Beach south of Maroubra and Malabar. You can snorkel here too, because it's well-protected from ocean swells. Around the corner from Little Bay Beach is Bare Island, which was a filming location for Mission Impossible II. This island is one of the best snorkelling locations in Sydney.

Cool off in an ocean pool

If you're visiting Sydney during the warmer months and looking for an escape from the heat, visit one of the wonderful ocean pools along the Bondi to Malabar coast. These picturesque local attractions are nestled alongside the Pacific Ocean, so you can enjoy a safe saltwater dip with out-of-this-world sea views.

The most famous ocean pool along this coast is run by the Bondi Icebergs Club. It's particularly fun at high tide when there's a swell running. Waves crash over the wall and into the pool.

Travelling south, the next sea pool is Bronte Baths, which first opened in 1887. Further down the coast is the Clovelly Ocean Pool, followed by Giles Baths, Ross Jones Memorial Pool, McIver Baths (ladies only, admission 20 cents) and Wylie's Baths. The smallest ocean pool in this area is the Ivor Rowe Rockpool, perfect for a paddle if you're hiking the coastal walkway. Last but not least are Mahon Pool and Malabar Ocean Pool - both are free for anyone to enjoy.

The most famous Sydney ocean pool is run by the Bondi Icebergs Club. It's particularly fun at high tide when there's a swell running. Waves crash over the wall and into the pool.

Exploring Sydney's coast and harbour on foot is fun at any time of the year. You'll find new places and extraordinary views, as well as excellent cafés and ice-cream vendors to keep your energy levels up. Some of these recommendations are light and easy, while others will take half a day or more. They're all heavy on the scenery.

About three hours from go to whoa, this is the number one walk in Sydney. It leads you to Sydney's best-loved beaches, taking in parks, clifftops and rock pools along the way. Many people only walk the Bondi to Bronte section, however the path through Waverley Cemetery to Coogee Beach shouldn't be missed. From late October until early November, Sculpture by the Sea makes the walk even more interesting.

The walking path around Farm Cove, between the Sydney Opera House and Royal Botanic Gardens, is a beautiful way to get some fresh air in the CBD. Snap a selfie at Mrs Macquarie's Chair, then walk back to the city through the gardens.

This 5km walk runs from Taronga Zoo to Chowder Bay, hugging the coast tightly. You get big views of the Sydney Harbour Bridge, Opera House and the cityscape. At Chowder Bay you'll find a great assortment of seafood-focused restaurants for lunch or dinner.

Start this adventure with a ferry ride to Manly Beach, then follow the coast westward all the way to Spit Bridge. You'll find native bushland, quiet inner harbour beaches, pretty bays and massive sea views. It's a 10km commitment for the entire journey, but worth every step.

Another on-foot adventure that begins with the ferry to Manly is Gunner's Walk, which is around Sydney's North Head. The area includes the historic School of Artillery, where army gunners lived and trained. Today there's a visitor centre and plenty of tracks to follow. While walking, you'll come across military remnants, wildlife and spectacular ocean views.

Between Drummoyne and Balmain in the middle of Sydney's inner harbour is Cockatoo Island, a former convict colony and industrial area that is now a UNESCO World Heritage site. The visitor centre on the island provides maps for self-guided touring of the historic docks, buildings, silos and tunnels. Ideally, save a whole day for this Sydney attraction. 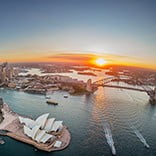