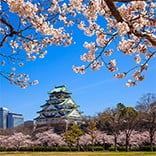 Air New Zealand fly seasonally non-stop to Osaka between November and March each year. Japan's third largest city Osaka was dubbed the 'nation's kitchen' due to its historical role as a rice trading hub.

Boasting a warm climate, Osaka is a comfortable winter destination and you'll certainly need t-shirts for a summer visit. At its peak Osaka reaches an average of 31.6 degrees (August) and at its coolest (January) it averages 9.5°C.

Osaka citizens pride themselves on having a more down-to-earth attitude than those from the capital and their pragmatic approach to life is reflected in the heavily commercial vibe of their city.

And while Osaka may not be the most aesthetically pleasing of Japan's cities, it doesn't lack for entertainment options. Check out the numerous outstanding food stalls, the serenity of Castle Park, the towering 40 level Umeda Sky Building, and lengthy Tenjimbashisuji Shopping Street for a dose of retail bingeing.

There's also a host of excellent day trip options; a visit to the eight storey Osaka castle is widely considered a 'must do.' There you'll find a masterpiece of traditional Japanese architecture with a dedicated museum and spectacular views. Or for a sombre cultural experience, take the bullet train to Hiroshima and then boat to Miyajima Island to see the Peace Memorial Park and Itsukushima Shrine.

Air New Zealand has been named 2020 Airline of the Year by AirlineRatings.com